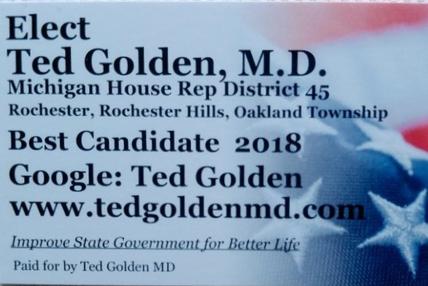 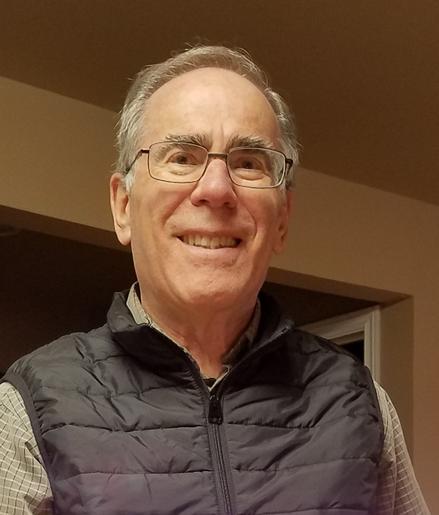 Improve State Government for Better Quality of Life and Save Money

I am pleased to announce that I have filed to run for the Michigan House of Representatives.  This will be round two of Dr. Golden vs. Webber.  As you recall I did not do well in round one.  However, I feel that after serving two terms Webber presents a poor image for this community.  So, I am saying, Come on Mike, let's go one more round.

My life's plan when I was in the sixth grade was to first be a physician, and then a politician with the idea of helping people. I have been a successful dermatologist, and now it is time to be the Michigan House Representative from District 45. My main goal is to improve the living climate in Michigan through better health, and reducing government induced stress and anxiety. An important way to achieve my goals is for individual Michigan citizens to empower themselves concerning Michigan government, and for citizens to receive equal and fair treatment from state government. This means that there has to be changes in Michigan. You will save money with these important changes

Changes in Michigan must start at the top with State Constitutional amendments for judicial retention elections, commissions to gather and disseminate information concerning judicial performance, merit appointment of judges, and the majority of members of state licensing boards to not come from the group the board oversees. I favor the constitutional amendment to eliminate gerrymandering.

All self paid health insurance premiums and medical expenses should be subtracted from gross income in order for all citizens be taxed equally and fairly concerning health insurance premiums and medical expenses.  Fair taxation should be based on the ability to pay. Many health care issues are of great concern such as drug over dose deaths, physician stress, guns, abortions, health insurance premiums, medical malpractice, and environmental concerns. It was disgusting what Dr. Fata did to patients in this community after learning the State of Michigan was informed about his criminal practice of medicine, and let him continue for three years before the feds finally arrested the evil doctor. Education should always be a priority. The consumer needs the state to provide better protection. Old liquor laws formulated just after prohibition ended need to be examined and updated in order to make sure that the customer is not overpaying for alcohol due to excessive regulation. I favor the legalization of marijuana, but it could be over regulated due to of all people the Republicans.  Mike, the roads are worse on your watch.  The Michigan Freedom of Information Act needs to be expanded to include the governor, the legislature, and more of Michigan government. Michigan police officers should be held to a fitness standard. Jobs?  Michigan did not make Amazon's top twenty list concerning the location of its second headquarters with high paying jobs.   Improving the living climate will help Michigan's economy.  Divorce is the ultimate stress and anxiety inducer aggravated by the divorce industry and governmental complacency.

Michigan has to address the non-economic people issues, which are actually costing many a lot of money due to real monetary damages because of a lack of citizen empowerment concerning state government. What about the economic and emotional damages due to government induced stress and anxiety. The Republicans and others do not want change because they profit from the status quo. The Republicans in Michigan will bombard the public about taxes and spending, and for more guns in order to avoid people issues. They do nothing except bash the government in order to avoid changes that could help many. As a typical Republican, Mr. Webber stated and promoted on his 2014 and 2016 campaign websites that some of his political objectives were to have a part-time legislature (did not happen), lower taxes (did not happen), opposed providing health care for the needy, and the Second Amendment.  In 2017 he voted yes on legislation to put more guns on the streets by allowing uncertified unregulated untrained concealed carry pistol shooters.  He could not facilitate auto insurance reform in order to reduce auto insurance premiums.  He does not believe in global warming. How has he helped you? The public will benefit from someone like myself who wants to protect the individual from government induced abuse, stress, and anxiety. I am promoting better Michigan government. I may even save you some money.

Please, plagiarize my ideas, print out this page or any pages from my web site, and distribute them.

Vote for me in the August primary and in the November election.